This ESRC-funded research project was part of the UK-Brazil Collaborative Research Call under the auspices of the Newton Fund and the Urban Transformations programme (grant number: ES/N013247/1) and was directed by Professor Cathy McIlwaine and co-directed by Professor Paul Heritage (Queen Mary University of London. It explored the nature of Violence against Women and Girls (VAWG) in Rio de Janeiro and London. It worked with the Brazilian diaspora in London and with women in the favela, Complexo da Maré in Rio de Janeiro between 2016 and 2019.

The research, which was undertaken in partnership with the Latin American Women’s Rights Service, Peoples’ Palace Projects, CASA Festival in London and with Redes da Mare and the  Escola de Serviço Social, Federal University of Rio de Janeiro (UFRJ). Dr Miriam Krenzinger was the PI in Brazil in partnership with Dr Eliana Silva, the director of Redes da Mare.

Results: Among a huge range of issues that emerged, four in every five Brazilian women surveyed had experienced gender-based violence (GBV) in their lifetime (82%), that nearly half (48%) of all Brazilian women had experienced some form of GBV in the UK, and that emotional/psychological violence was the commonest type of violence experienced in London (48%), followed by physical violence (38%), with 14% experiencing sexual violence. However, 56% of women never reported an episode of violence in London, mainly because they thought nothing would be done about it, lack of information, shame and fear of deportation due to insecure immigration status.

Rio de Janeiro: the research was conducted in Complexo da Maré, a low-income community in the North of the city comprising nearly 4 km2 and including 16 slums. The research entailed a survey with 801 women, testimonial interviews with a further 20 women, 7 focus groups (with 59 people in total) as well as 14 interviews with service providers.

Results: awareness of VAWG was more limited than in London. Although the vast majority of those surveyed (76%) stated that VAWG occurs in Maré, only 28% openly stated that they had suffered it. However, when asked about reporting such violence, 38% stated they had experienced it. As for the types of GBV suffered, physical violence emerged as the most important (by 51% of women), followed by psychological/emotional violence (42%) and sexual abuse (7%).  Intimate partners committed a third of GBV with only 15% perpetrated by strangers; the remainder were by work colleagues and bosses and friends and family.

Artistic outputs
The project resulted in a range of artistic outcomes:

London: Efemera was performed at the CASA Festival at the Southwark Playhouse, London in October 2017 for 3 performances, all sold-out to 300 people. One show was followed by a panel discussion with Cathy McIlwaine, Rosie Hunter from Peoples’ Palace Projects and Gael le Cornec.

Rio de Janeiro: Efemera was also performed in Rio de Janeiro at the Casa de Bellas Artes in Mare (where the Brazilian research was conducted) and at Sede das Cias (a feminist theatre festival in Lapa, Rio) to 120 people in November 2017. Both shows were followed by panel discussions with Cathy McIlwaine, Gael le Cornec, Eliana Silva and Paul Heritage.

Brighton: Efemera was performed at the Brighton Fringe Festival in May 2018 x 3 shows to 60 people (short-listed for the Green Curtain Award)

“Efemera was absolutely fantastic and emotional. It spoke to me on a personal and deep level. As a Mexican-American who has been sexually abused as a child and later on helped others deal with the same issues. It is inspired and I’m continually inspired by those who choose to speak out. Thank you!” :-)

“This is such important research that needs to be shared and publicised. The performance made me feel hopeful that the arts can live a platform for the voices of the victims of social violence - since they are so often failed by the media & the justice system. Good work!" 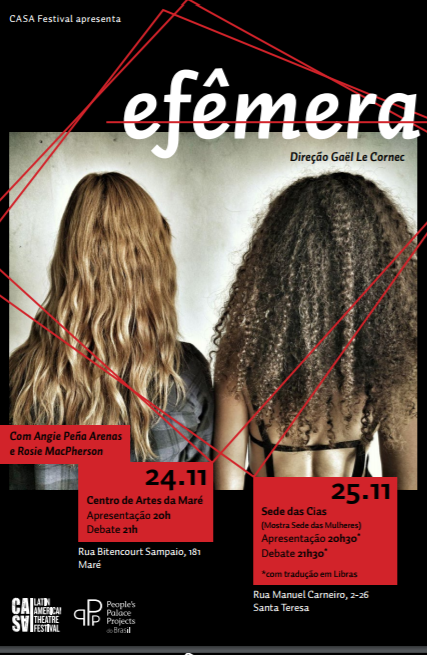 Trigger warning: Please note that the content of this film deals with issues of violence against women, including sexual abuse and rape. If you have been affected by any of these issues, help and support is available from the following organisations:

3) Ana. Ana is a short fiction film based on Efemera, again written by Brazilian playwright and actress, Gaël Le Cornec. It premiered in August 2019 in Tunisia, Morrocco and Jordan as part of the WOW Film Festival (Selected Category: Best Fiction Short).

4) Scar. An audio-visual installation created by Bia Lessa, one of Brazil’s most renowned theatre directors/artists / filmmakers. This was based on interviews with 20 women from the favela of Maré, Rio de Janeiro whose testimonies were filmed. This was performed at the Women of the World Festival, Southbank Centre, London, March 2018. It was open for 3 days and was attended by approximately 500 people.

Rio de Janeiro. A performance was also held in Casa de Bellas Artes, in Mare in March 2018 with 50 people.

McIlwaine and Evans (2018) We Can’t Fight in the Dark: Violence Against Women and Girls among Brazilians in London (long version).

McIlwaine and Evans (2018) We Can't Fight in the Dark: Violence Against Women and Girls among Brazilians in London (short version)

For more information on the research project see http://transnationalviolenceagainstwomen.org/